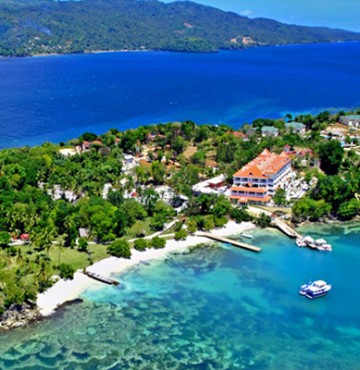 Samaná (old spelling: Xamaná), is a town and municipality in northeastern Dominican Republic and is the capital of Samaná Province. It is located on the northern coast of Samaná Bay. The town is an important tourism destination and is the main center for whale-watching tours in the Caribbean region.

The town of Samaná sits on the Samaná Peninsula which came first into written history on 13 January 1493, when Christopher Columbus made here the last stop of his first voyage to the New World. He landed on what today is known as the Rincón Beach, where he met the Ciguayos who presented him with the only violent resistance he faced during this visit to the Americas. The Cigüayos had refused to trade their bows and arrows that Columbus’s pathfinders wanted. In the ensuing clash, two Amerindians were wounded. Because of the Ciguayos’ use of arrows, the Admiral called the inlet the Bay of Arrows (or Gulf of Arrows). Columbus took on board four natives to show in Spain, but only one survived. For most of the colonial period, the Spanish did not settle here, opening the place for runaways and privateers.

In 1756, under the direction of Spanish governor Francisco Rubio y Peñaranda, families from the Canary Islands founded the village and named it, Santa Bárbara de Samaná. It was named Santa Bárbara after the Queen Bárbara de Braganza, wife of King Ferdinand VI of Spain. They also settled on the other side of the bay, in Sabana de la Mar. As part of the Peace of Basel accords, the entire Santo Domingo colony passed over to the French in 1796. But in 1807, a small force from the British Royal Navy raided Samaná and turned it back to the Spanish creoles who were fighting against the last French bastion on the island. In 1822, after the Haitians had occupied the entire island, a French vessel threatened a renewal of the French-Haitian hostilities. After a small encountered, named “the Samaná Affair,” the French retired taking with them various families that had resettled here after the Haitian Revolution.

In 1824, Haitian President, Jean-Pierre Boyer, invited United States Blacks to migrate to Haiti, which by then ruled over the entire island of Hispaniola. Various U.S. families settled in Samaná and prospered. Their descendants are known as Samaná Americans. With the creation of the Samaná Maritime District (an old division similar to a province) in 1865, the city was elevated to the category of municipality.

Samana has a tropical climate, more specifically a tropical monsoon climate, with hot, somewhat wet summers and warm, very wet winters. The mean annual rainfall in Samaná is 2,349.8 mm and the mean annual temperature is 26.5°C.